On September 5th, in the year 555, James Peabody McHugh had become fed-up with the stuffy and formal greetings of the royal court of Highboroughcourt. He toiled for so long and though hard about his dilemma. In the 5th hour, James, in a fit of despair and sheer idiocy, slapped his forehead with his hand and said "give me five".

Whereas the historians of Highboroughcourt argue that James intended that he wanted those five hours back-because he realized this endeavor was a waste of time. But, serendipity struck. A beautiful courtier, Selene, had seen this event and lifted her hand and said "no, you give me five."

James lit up, and behold! The first "gimme five" was performed! Later, James and Selene married, had five children and reigned over five fiefdoms. Their court was one of casual greeting and both were beloved by their subjects for the "gimme five" and their awesome aligator-filled moats. An era of peace, prosperity reigned.


Now we see the "gimme five" everywhere, but today we remember its origins. In honor of the hard work by James and the serendipitious discovery by Selene, give your buds a "gimme five." 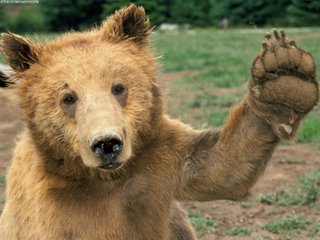 Posted by Lady Jane Scarlett at 12:05 AM

Here ya go Dragon! Many high-fives for the ladies! :D

OK, I just put in a random comment so that we'd have 5 comments. :D

I love this bear like I love taffy.....and I'm a man who loves his taffy!