Assault of the Santa 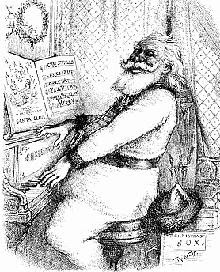 One of the things people complain about the most is how earlier and earlier the Christmas Season comes. Traditionally radio stations started playing their Christmas music the second week in December, but more recently this has rolled back, to where some stations had reportedly gone to the all Christmas format as early as the end of Halloween. (And let us not even get started on the stores….)

We could make an entertaining case for the obvious Conspiracy Triumvirate of Big Retail, Big Greeting Card and Big Candy, but in a Big-Picture sense, it is understandable this push to “extend” the Christmas season beyond the borders of December. There is a natural inclination to be in the “Christmas Spirit” as long as possible. Say what we will about holiday stress, for many, the Christmas Season is a time to go shopping for loved ones, attend parties, bake cookies, and pull out our favorite decorations and all that other fun stuff. Strangers tend to be nicer to each other around Christmas, and it is no great sin that some would look to make that feeling last as long as possible.

What I do not get is the vitriol heard in opposition. People act as if they are physically assaulted because radio stations go Santa a few weeks early. As if red and green banners at the mall are somehow causing seizures. Yeah, I get it: they want us to buy more to help their bottom lines. I got news for you: you are in a freaking mall! You have already lost any argument you could make about pleas for your dignity and attempts to snatch at your pocketbook.

In case you still are confused, I developed a little formula to help you out:


Or, put another way, if this is what you are complaining about, you really do have it made. So they put up Christmas a few weeks early. Is it really so awful to hear familiar carols a few more times? Is it going to kill you if Main Street puts up their big candy canes on Veteran’s Day instead of a fortnight later?


Lesson #3: Choose to focus on the positive aspects of Christmas that make you feel good rather than complain about something that really isn’t that big of a deal.
Posted by Hyperion at 12:00 AM

Hyperion=Jolly Elf. :) Christmas signals the end of another year and that can put people in a reflective mood. Sometimes reflective moods=omg what am I doing with my life! Maybe it's just me.